Ever since January I have been enraptured with the game Kingdom of Loathing. Kingdom of Loathing is a browser-based online role-playing game… kind of. Adventure Quest and RuneScape are browser-based online role-playing games. Kingdom of Loathing is more like a parody of one. For starters, it is very decidedly Web 1.0, or more like Web 0.5. It uses no Flash and hardly any Javascript. Its graphics consist of extremely crude stick figures and doodles. Its interface resembles a 90’s web page more than the latest Final Fantasy menu system. Battles, including player vs. player battles, are fought by clicking on options and waiting for the page to reload. The most interactive feature in the game is a chatroom on the right side of the screen. But yet, this is the most addictive game I have played in a very long time.

Kingdom of Loathing is extremely awesome for five reasons:

1) It’s accessible. For starters, because of its decidedly low-tech design, Kingdom of Loathing can run on pretty much any machine with a web browser that supports frames and Javascript. If you for some reason are still on Windows 98 or, worse, Mac OS 9, you could play this game with the old browsers that run on those systems. It also works really well in mobile browsers (no app necessary.) I have not actually tried this, but since the game is mostly text, you could probably even play it using screenreader software.

(The character selection screen when you first join the game. No generic fighters or clerics here.)

2) It’s funny. Not only does it not take itself seriously, it pokes fun at everything and everyone. You’ll not only see parodies of RPG tropes and monsters, but references to pop culture and subtle innuendo as well. The developers delightfully skewer everything from extreme sports to They Might Be Giants. This can get a little out of hand at times–sometimes pop culture knowledge is necessary to beat some of the game’s puzzles–but it’s often rewarding to stumble upon, say, a swarm of “scarab beatles” who drop an item called “happiness”, which seems incredibly out of place in a game about killing monsters, until you examine it and discover it’s a weapon–a “warm gun,” as a matter of fact. Further encounters with the “beatles” might net you a “rocky raccoon,” a “mojo filter” or even “Maxwell’s Silver Hammer.” Each weapon, item, and monster in the game has its own unique and charming flavor text. It’s often worth equipping a weapon or using an item in combat, even if it doesn’t really do much for you in the current stage of the game, just to see what it will say when you use it. 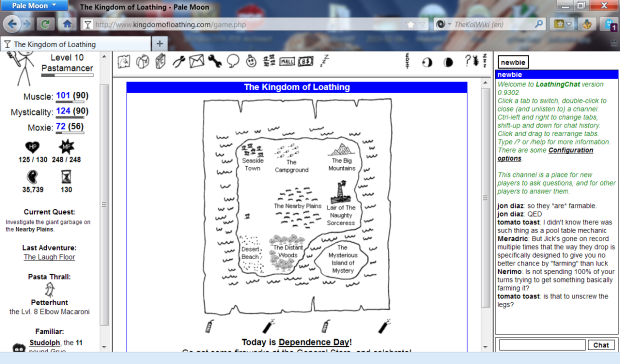 (Your view of the world in Kingdom of Loathing.)

This more than makes up for the fact that the game doesn’t really have much of a plot per se. In what seems to be a parody on the barebones plots of early computer RPGs, your main mission in life is take random quests from the Council of Loathing (mostly of the form of kill monster X or retrieve item Y) until they give you the quest that ends the game. But while you’re looking for that final boss, you will be sneaking into the lair of the king of the “Knob Goblins”, fighting gnolls on “Degrassi Knoll,” swapping innuendos with “Smut Orcs” on your way to the mysterious “Orc Chasm,” playing band manager to a group of disgruntled demon heavy metal musicians in the pits of “Hey Deze,” and solving your own murder in an extended parody of both Twin Peaks and The Shining, among other things. There are also a huge quantity of subquests, some of which are part of the core content, and some are only available if you donate real money to the game. All of them that I’ve experienced so far have had top-notch writing and some good jokes. The humor is often scatological and often of a risqué nature, but the writers do their best to keep it PG-13. There are no graphic depictions of sexual content and you won’t find very many of George Carlin’s favorite words.

3) It’s got a great community. Kingdom of Loathing has thousands of fans who still play the game after all these years. Players can join various in-game clans (analogous to guilds in World of Warcraft) where they can pool resources, access special stat-boosting equipment, and participate in special dungeons organized around social play. There are hundreds of these groups and many of them are still highly active. I haven’t done much with the clans, but it’s nice to know that they are there.

The chatrooms, from what I have experienced, are usually very civil, and the people who participate speak in complete sentences and have interesting things to say. This might have something to do with the fact that the game requires you to pass a test of basic English in order to participate in the forums. There’s even an in-game item called a “WANG” (as in the word processor, not the whatever you were thinking of, you pervert you) that will automatically spellcheck the chat posts of a user you think’s using too much “leet speak.”

I’ve experienced the folks in the newbie chatroom to be extremely helpful and friendly, and they’ve answered all of my questions without a single flippant remark like “RTFM, noob!” Heck, I said once in chat that I needed some Meat (the in-game currency) in order to participate in a clan function, and some random guy gave me 400,000 Meat just out of the kindness of his heart. It might not have been a lot of money for him, but it was a lot of money for where I currently was in the game.

Speaking of RTFM, there is actually an M that you can RTFM. It’s the KoL Wiki. It is an exhaustive guide assembled by fans on everything inside Kingdom of Loathing, and functions sort of like a strategy guide. I try not to use it too much, as it is quite spoilery.  But if you’re ever stuck on anything, it’s an invaluable resource. It’s also fun to look at to read about parts of the game you can’t access any more because they were one time events or older content that has since been retired. Fans have also authored many other helpful guides, such as interactive puzzle solving maps, a reference to all of the pop-culture references found in the game, and an exhaustive study on the in-game economy (players can sell in-game items, sometimes for lots of Meat, by running stores in the Mall of Loathing, and this tool helps you decide when to sell and what to charge. Very cool.)

4) The game has been constantly updated for the last 12 years. The game has been running constantly since 2003, and the developers are always adding new content. Just this year, they revamped the store menus to make them easier to use, and added two new quests in beginners’ areas to give a boost to newbies. Every month they add a new premium item that you can get for a donation of $10. Sometime it’s a useful weapon or stat-boosting item, and sometimes it’s access to a new level. This month (April 2015), the special item was a ticket to “Dinseylandfill,” a playground of toxic waste that mocks a certain popular family entertainment destination.

They’re also doing things to tweak player balance and fix bugs, and they’ll often do that in the most entertaining way possible. In 2004, some players found a bug that when exploited gave them billions upon billions of Meat. Instead of banning the players responsible, Asymmetric introduced a new in-game faction, the Penguin Mafia, who stole people’s Meat and also offered items for sale at extremely inflated prices that people could buy for bragging rights. They also had the Council of Loathing construct a huge cannon to fight off the Penguin Mafia which required massive donations of Meat to build. The top donors got bragging rights. From time to time, the developers will put in other “meatsinks” such as these to make sure the in-game economy does not suffer from too much inflation. That’s a lot more fun way of doing things than strictly punitive measures.

(Don’t push your luck, though–you do not want to mess with these guys.)

5) The game is actually quite fun. Even though you are playing a game where the character classes are named “Disco Bandit” and “Pastamancer” and such, and every weapon, item, monster and situation is named after a pop culture reference, the core mechanics that drive the game are very sound. There are three main stats (Muscle, Mysticality, and Moxie) that determine the outcome of every action you do in the game. Maximizing those stats is the way you advance through the game, just like, you know, an RPG game. There are thousands of items, each of which affect stats a little differently, and there is a lot of  strategy in mixing and matching equipped items to face the battles ahead. In addition to battles, there are also a lot of puzzles you have to solve in order to pass the challenges of the game. Some of them are simple deductive logic puzzles, some require you to decode ancient dwarven runes, and some of them require you to put your answers in the form of a haiku–or a palindrome.

The core game itself is really quite short. You get the final quest at level 13, which I got to on my first ascension in about two weeks playing less than an hour a night. However, once you beat the game you can “ascend” to a New Game Plus style mode that lets you play the game again as another class. You can play in Standard Difficulty, which lets you use the items you accumulated during your last game but with some restrictions, Hardcore Difficulty, which doesn’t, or a Special Challenge Path, which can be as simple as being unable to eat or drink, or as tricky as “Bees Hate You,” in which you cannot equip or use any item with the letter “b” in its name. This makes some quests impossible and others extraordinarily difficult. By playing the game over again you can learn extra skills for your character and access special ascension content, which really adds to the replay value. I have ascended three times already and I am still discovering new things. There are people on here who have ascended hundreds of times, and I assume they keep finding things that keep them coming back to this Kingdom of Loathing.

So yeah, that’s what I have been doing with all my time since January. Maybe now that I have gotten this review out of my system I can go back to writing again–maybe even write more Atari 2600 reviews, since they seem to be the main interest of people who visit my blog site. At any rate, if I have convinced anybody to try Kingdom of Loathing just for a bit, my writing will not have been in vain.