I’m sorry I haven’t written anything in the last month or so. I have found a new obsession. His name is George and he is a 2003 Ford Escape with a 3.0 litre V6 Duratec engine and four-wheel drive. Yes, after all this time, I have finally purchased a car of my own. I know it’s weird for someone to have gotten to the age of 35 in this day and age without having their own automobile, but I was previously hampered by an extreme lack of money. With that problem taken care of by my admin assistant job for a tour bus and taxi service, however, I decided to bid on an auction for a former fleet car they were getting rid of.

I had fallen in love with the Ford Escape from the minute the company was deciding to dispose of it. For a 11-year-old old SUV with 200,000 miles on it, it was in great shape. There was no body damage apart from a few scratches and the engine looked pristine. And since it was a company car, I knew our garage had done all the scheduled oil changes and preventative maintenance. So I looked on the Kelly Blue Book website, and that gave me an estimated private-party sale value for the Escape of about $3,400. So for my bid, I divided that in half, giving me $1,700, and in order to throw off someone who might try the same thing, added a random number to it that sounded auspicious. So I bid $1,776.00 on it. And I won the Ford Escape on February 20, 2014.

Of course I was later to learn that the next highest bidder only bid $700 on it, but I didn’t care. It was still half of Blue Book and once I took care of whatever minor problems it had, I could probably sell it in the closest city for $4000, based on what I’d seen on Craigslist. But I decided I wasn’t going to sell it. I had bonded with the car already. I had already given it a name: George, after George Washington, since I bid $1,776 on him and I won him on President’s Day. 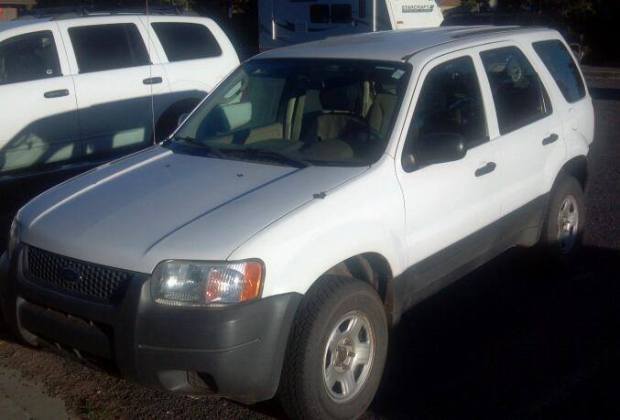 I think I got a fantastic deal with George. Around here, $2000 will barely get you a piece of crap car with one or more doors or windows broken or missing, a bumper held on with duct tape, and the ominous ad description of “needs work.” As it stands, George runs great. His V6 engine has great acceleration and purrs like the proverbial kitten. Four-wheel drive works as well, although the only chance I’ve had to test it is going down a forest service road for a few miles. All the doors and windows work like they should. The interior, while not factory condition, at least does not have any serious rips or tears.

(But it does come with an awesome sun shade!)

The only mechanical problems so far are a small oil leak (which is not too serious or surprising, given the age of the car) and one of the catalytic converters is returning a problem code of reduced efficiency, which will only present a problem if I want to register it in a county or state that requires smog inspections. Since I’m not planning on moving anytime soon, I’ll just drive it for a few years or until a newer, more fuel-efficient vehicle catches my eye.

Ever since I got George, I’ve been obsessed with learning about cars. I never bothered to do anything with cars growing up. I was far more interested in video game cars than the real thing. Heck, I didn’t even get my driver’s license until I was in my late 20’s. So I have been catching up for lost time and busily absorbing all the information I can on the Ford Escape and its engine and how to do basic maintenance like oil changes and tire changes and reading the trouble codes with an OBD-II scanner. I’ve been poring over message boards like Escape City and sites like Fuelly to find out what other people have been doing with their Escapes and how to get the maximum amount of mileage out of the old beast. I’ve even been binge watching the British car show Top Gear, where three TV presenters and a masked race car driver tool around various exotic world locales in the kinds of supercharged sports and luxury vehicles you average blokes would never even see in real life, much less drive. They’d never touch a Ford Escape with a ten-foot pole, but I don’t care, because I’m obsessed with cars now. All kinds of cars. I even want to get a small sports car with a manual transmission now so I can feel closer to the road. 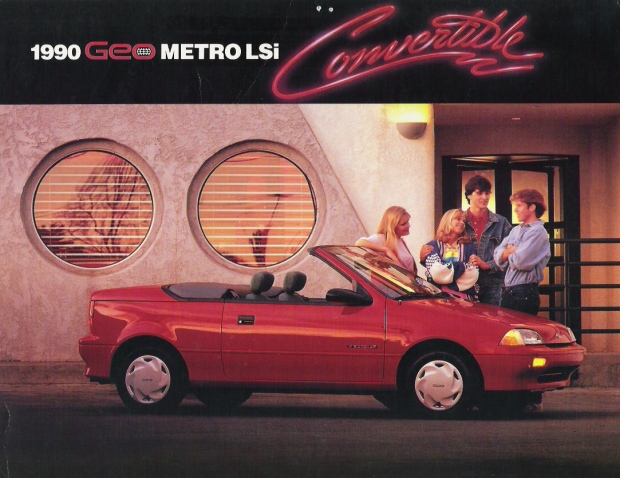 I would have never thought in a million years that a SUV, of all things, would bring out my car lust. Growing up, we always had compact cars that got excellent gas mileage. It’s the kind of car you need when you live in Southern California, you’re poor, and you commute 100+ miles on the freeway to work and back every day. I always saw SUVs as gas-guzzling monstrosities driven by small-penised men with insecurity issues and suburban housewives whose idea of going off-road was parking in the gravel section of the church parking lot but they wanted the monster-truck tires and 18,000 lb. towing capacity “just in case.” My leftist public-school indoctrination had convinced me that SUVs were the reason the environment was fucked up and we were all going to die because us fat, evil American pigs wouldn’t give up our ozone-depleting urban assault vehicles.

Moving to a remote village in Northern Arizona changed my mind about SUVs, however. Out here, half the cars are Subaru station wagons and the other half are a SUV or a big pickup truck of some kind. And they all have four-wheel drive. You kind of need it because not only is the area mountainous and steep, it is covered in snow and ice six months out of the year. And where we live, they don’t even plow the roads until it gets “really bad,” and they don’t salt them either, because some environmentalist thought that elk and deer would supposedly mosey into the streets to lick the salt off the asphalt. Instead, we get red cinders, a kind of volcanic ash that turns the roads into gravel pits come spring. If you don’t have a high-clearance vehicle, you’re liable to scratch your entire undercarriage with those pebbles from hell. (I got one stuck in my eye once… it took three days to get it out of my eye and another week to recover from the scratches it made on my eyeball. Very unpleasant!!!)

So I’ll take the fact that George only gets about 17 miles to the gallon and is slightly harder to maintain than the old Toyota Tercel my dad could fix with Duct Tape and a pair of pliers as a small price to pay for having a vehicle that can survive our winters. Because when you’ve seen nothing but white on the ground for two months and you’re starting to go crazy from the cold and the isolation, nothing beats being able to jump in the truck and head out to Phoenix or Las Vegas or some place warm.