One of my favorite bloggers just posted this suicide note yesterday. And since I didn’t check the blogs yesterday, he’s probably already dead. And of course, there’s nothing on his blog to indicated he did or he didn’t commit suicide. All I can say is… actually, there’s nothing I can say.

My dear and loving family,

Well, I’ve reached the last rung at the bottom of the ladder, and there is nowhere else to go but down the last step.

I was going to write each of you a letter, but I just don’t have the time left, and I wanted to post this on my last hope for sanity, this blog, SchizoIncognito.com. I hope when the smoke clears, each of you read through my entries for the past couple of months. It will explain a lot about me you may not have known, and why I have done what I have done.

There is no nice way to say this: by the time you read this letter, I will be dead. This may come as a shock to some, but to others who are closest to me, this has been coming for a long time. The reasons for my…

Lately, I have been trying to relearn French so I can help my elderly father fulfill his lifelong wish to travel to France, to meet his relatives and see his father’s grave in Alsace-Lorraine. I’ve been doing so mostly by watching DVDs of Disney movies and other films I know by heart with the French audio track on, and by reading anything I come across that isn’t too complicated, mostly children’s stories so far. I ran into one today on Project Gutenberg that was quite weird. Called Entre Nous: Lectures Françaises à l’Usage des Écoles Primaires, it seems to be the French version of “See Spot Run,” a collection of simple stories for teaching young children. It was written in 1904, but I’m having no trouble with the language, as it is indeed very simple.

The stories themselves, however, are quite weird. The first story seems to be about a couple of very young kids, Jean and Marie, who are playing “papa et maman” with their toy dolls standing in for children. One of the dolls, Paul, is very naughty and eats sugar right out of the sugar jar. Jean and Marie catch him at it and get very annoyed. Jean punishes Paul by hitting him, which causes him to fall off the table. In the process, his arm falls off. Jean leaves and comes back as “le docteur,” and tells Marie that he will heal the wayward child. Jean goes into the kitchen and asks “la bonne,” who is apparently his family’s servant (it was 1904, I guess) for a piece of twine. He ties Paul’s arm to the sleeve of his chemise and tells Marie that Paul is cured. Marie sees her mutilated son and says “But how will he be able to work when he is older?” Jean says, with typical Gallic pragmatism, that “he can always be a singer; then he won’t need his arms.” 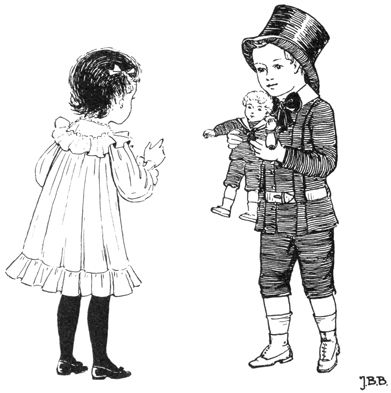 In the words of Buzz Lightyear, “I don’t believe that man’s ever been to medical school.”

I wonder what this was supposed to teach young French kids from 110 years ago. That child abuse causing horrible mutilation is okay as long as the victim can still sing for his supper? Apparently, it was a different time and place back then. Oh well, I’m still having fun.