Today after work, I went to the post office to check the mail, and discovered that my fiancee had a large box from Amazon waiting for her. I picked it up, and brought it to her at the employee cafeteria, where we usually spend our dinners together (since she has to work evenings). She opened the box, and revealed that she had ordered… a big tub of dinosaurs. Specifically, Animal Planet’s Big Tub of Dinosaurs. She then squealed with joy and said that we should take them out and play with them. She took them out of their plastic tub, and we set the dinosaurs along with the palm trees, rocks and volcanoes that came with them (because naturally, dinosaurs all live in Hawaii) up on the plastic  prehistoric playmat. 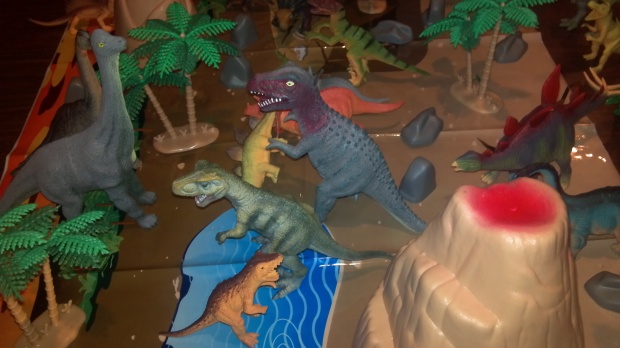 I started snarking it up about the scientific inaccuracies present in the toys. For example, the brachiosaurus was depicted as having its huge neck perpendicular to its body, like a giraffe. However, most modern paleontologists believe that brachiosaurs would have been unable to do that due to the sheer difficulty in pumping blood up a 30-foot neck. I distinctly remember the sauropods in Walking With Dinosaurs holding their necks close to the ground and rearing up on their hind legs in order to grab leaves from tall branches. I suppose the jury’s still out on this one, as well as the theory about velociraptors and other late Cretaceous dinosaurs having feathers. None of the dinosaurs in this set had feathers of any sort, not even the velociraptor, who was depicted, strangely enough, as being only slightly smaller than the T-rex.

But my fiancee, undeterred by this glaring oversight, as well as the presence of Triassic, Jurassic, and Cretaceous dinosaurs in the same box and the fact that the triceratops was very unnaturally orange, actually started playing with the toys. She held the dinosaurs up and made funny voices and started acting out short skits. And even though I was a little confused, soon enough I joined her. We had a little war going on between the herbivores and the carnivores, and then my fiancee discovered that the ankylosaurus would kick T-rex’s butt because of its heavy armor and mace-like tail, and then we used them to re-enact the thrilling fight between Godzilla and Anguirus in Godzilla Raids Again.

Meanwhile, all the other employees in the employee cafeteria were looking at us like we had some kind of disease or something. But we didn’t care; we were having a good old time. And then my fiancee had to go back to work, so we packed up the dinosaurs and promised we’d get them out again when she got home that evening. Yeah, so maybe you don’t always see two grown adults playing with toys in a public venue, but you know, it was just what we needed at that time. And I’m so happy that I’ve found a woman who hasn’t lost her child-like sense of play. She’s a keeper, all right.