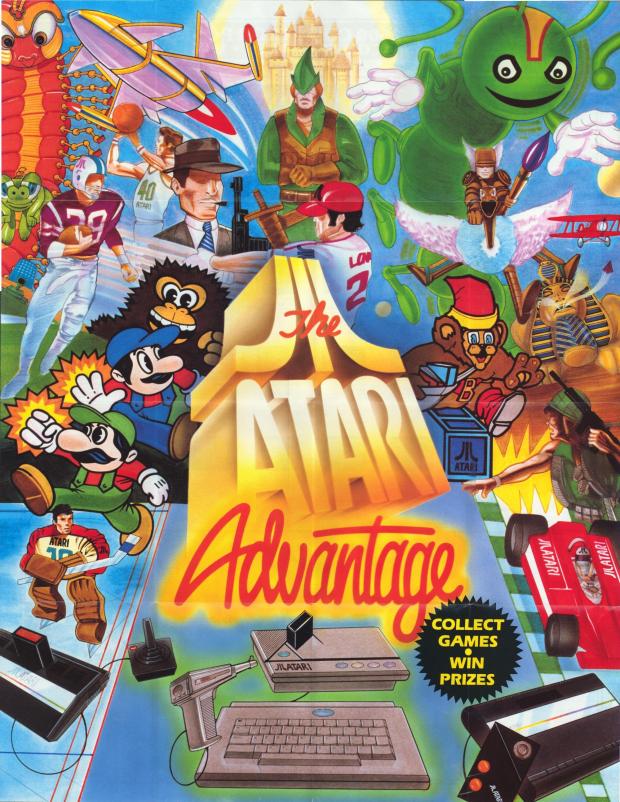 I was just poking around AtariAge today (since I seem to be on a huge Atari kick lately) and found a scan of this catalog for Atari 7800 games. When I was collecting Atari 2600 games I loved looking at all the catalogs, as they were filled with awesome artwork and descriptions of games I hoped to own someday. This catalog… well, it didn’t exactly inspire the same amount of awe. It is merely a single-sheet flyer with some very amateurish, weird-looking art on the front (I mean, the gangster and football player have no eyes! NO EYES!!!) and two-sentence descriptions and tiny screenshots of 7800 games on the back. 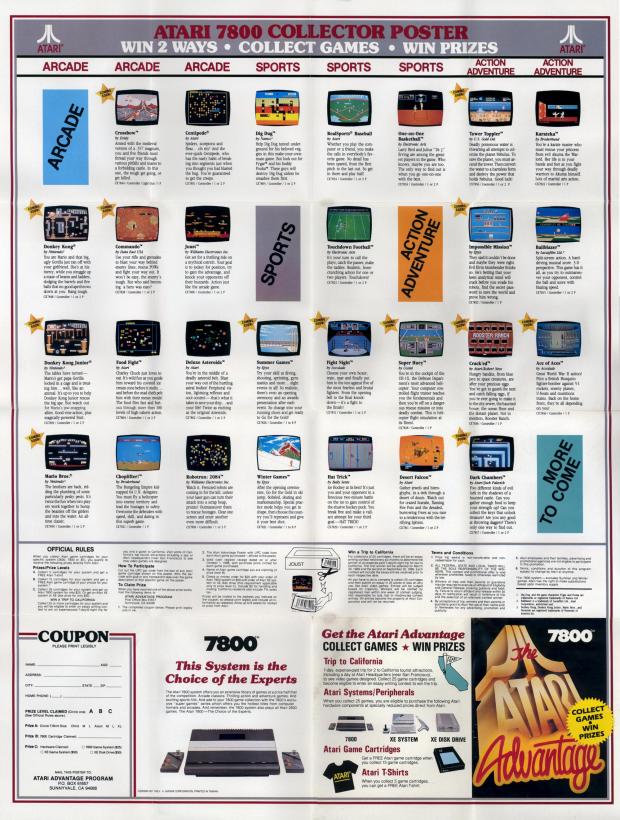 (Images courtesy AtariAge. Click on the pictures to enlarge)

However, something caught my eye on the bottom, a mention of an essay contest for a chance to win a trip to San Francisco to watch Atari programmers “design games.” In 1987, as an eight-year-old, I would have flipped for that. I think by then I had already wrote about twelve volumes in my diary on how much I loved Atari. I stalwartly defended Atari when all my classmates had moved on to other consoles. But… there was just one catch…

In order to participate in the essay contest, you have to buy 25 Atari 7800 cartridges. Yeah, kid, fork over the cash, or we won’t even look at your labor of love. I am so glad I never saw this ad when I was 8. I would have just died from the disappointment. My parents couldn’t afford to buy me a Nintendo, or a computer, or even shoes that didn’t come from Payless. When you consider that Atari 7800 cartridges were running about $20 each at the time, 25 of them would be, well, $500! That was a month’s wages on minimum wage at the time. I mean, you could almost buy your own trip to San Francisco for that.

I could just imagine what my mom (and moms across America) would say: “So Jackie, let me get this straight. You need the equivalent of a month of your dad’s wages by October 1, 1988 to buy video games, many of which only currently exist as a small, blurry screen shot in a flyer, just so you can tell Atari how much you love them, so maybe, just maybe, they’ll fly you out to San Francisco to watch nerds stare at computer screens all day? I think we need to up your Ritalin.”

It makes me wonder if anyone even won this contest. It’s impossible to know. The Tramiels were pretty much running Atari into the ground by this point. Meanwhile, their competition just up the coast in Redmond, Washington knew how to run some good contests that didn’t require you to purchase their entire game library to participate in: