I have been staring at this computer all day. I have no idea why. I’m not doing anything useful at all. I’m not looking for jobs, writing my novel, or learning Spanish. I’m not even playing Kingdom of Loathing, the online game that I got sucked into back in January. I’m watching old Homestar Runner cartoons that I’ve watched many times before and trying to make the ancient WordPerfect 5.1 word processor for DOS work on my Windows 7 setup.

As far as the last one is concerned, I know why I’m trying to do that. I feel like it would help me write again. I remember extremely fond memories of staring into the friendly blue screen with white text back in my teenage years, back when “serious” computers ran DOS and word processors were clunky, text-based affairs that required you to learn a metric shit-ton of control codes in order to do anything other than type. But for some reason, I have a lot of nostalgia for those days. I figured out how to use the keyboard interface and typed all sorts of stories and journals and school papers and projects into that thing. I felt like I could write anything with WordPerfect 5.1 on my mom’s 286. 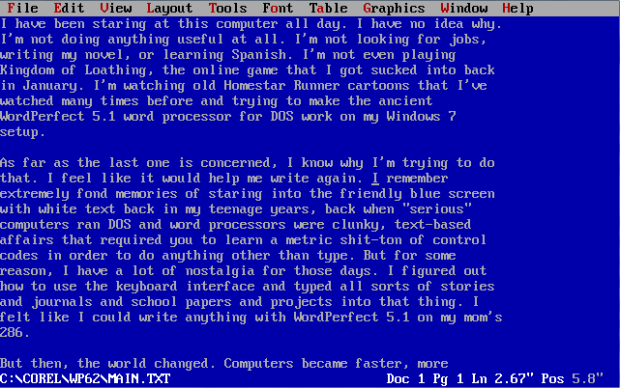 (We’re getting all recursive, now!)

But then, the world changed. Computers became faster, more capable, more connected, easier to use yet more annoying at the same time. The huge metal IBM box in the office got sent to the junk yard when my mom upgraded to a Pentium with Windows 95. It could get you on the Internet where an infinity of information came through at you, constantly distracting you. You could run multiple programs at once, but they all competed for your attention like a dozen people trying to instant message you at once. Program X needs updated. Program Y is shoving ads in your face. Program Z has performed an illegal operation and will be shut down! And don’t forget, you’ve got mail!

Windows-based writing programs like MS Word (and all Windows-based versions of WordPerfect) are set up with black text on a white screen. It made them present something that looked more like a printed page, but I found the glare of the white always hurt my eyes, no matter how I adjusted the contrast or brightness on my monitor. And while you’ve got dozens of fonts to choose from, and numerous other settings, you find yourself adjusting your work to look good rather than actually doing the business of writing. 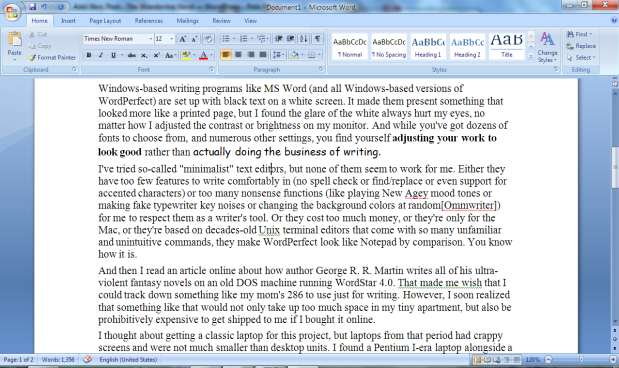 (Also… taking all the time to figure out why it’s making squiggles all over my work.)

I’ve tried so-called “minimalist” text editors, but none of them seem to work for me. Either they have too few features to write comfortably in (no spell check or find/replace or even support for accented characters) or too many nonsense functions (like playing New Agey mood tones or making fake typewriter key noises or changing the background colors at random) for me to respect them as a writer’s tool. Or they cost too much money, or they’re only for the Mac, or they’re based on decades-old Unix terminal editors that come with so many unfamiliar and unintuitive commands, they make WordPerfect look like Notepad by comparison. You know how it is.

And then I read an article online about how author George R. R. Martin writes all of his ultra-violent fantasy novels on an old DOS machine running WordStar 4.0. I googled WordStar and found this other article written by science-fiction author Robert J. Sawyer that said that WordStar was the greatest thing since sliced bread because of its awesome keyboard shortcuts, which were like WordPerfect’s but totally different. That made me wish that I could track down something like my mom’s 286 to use just for writing. However, I soon realized that something like that would not only take up too much space in my tiny apartment, but also be prohibitively expensive to get shipped to me if I bought it online.

I thought about getting a classic laptop for this project, but laptops from that period had crappy screens and were not much smaller than desktop units.

(We’ve come a long way since then.)

I actually found a Pentium I-era laptop alongside a dumpster about a year ago, and was going to clean it up to use as a distraction-free DOS writing machine, but the screen was dim, the keyboard was mushy and uncomfortable to type on, its floppy drive was broken, and had no CD-ROM, USB, networking ports, or anything to get software on the machine–or writings off the machine. I am a huge nerd when it comes to old technology, but I wasn’t about to spend $$$ on peripherals for this thing or rig up some sort of MacGyvered file-transfer cable to plug into this laptop’s serial port just to run WordPerfect again.

Then I thought, why not just emulate WordPerfect on my Thinkpad? There seem to be numerous ways to do that. Some guy at Columbia University seems to have spent a tremendous amount of time compiling them all. Well, that doesn’t seem to be working out for me either. I can get the program to run in DOSBox, in a window, which clashes horribly with all the other windows on the screen. When I hit Alt-Enter to make it run as a full-screen application, it attempts to emulate 640 x 480 VGA screen resolution… which makes the text blurry and really eyestraining. vBoxWP uses Windows system fonts instead of DOS console fonts, so it’s a little better… or it would be, if the program didn’t glitch out every time I try to do anything. Virtualbox works okay… but can’t do full-screen for reasons unbeknownst to me.

I also downloaded a more obscure emulator called PCE which emulates a 16-bit 8086 processor along with a complete IBM PC BIOS, peripherals, and VGA monitor. It’s quite neat–it even runs long-forgotten operating systems that time forgot and DOSBox won’t touch–stuff like CP/M (the original WordStar OS), Minix, and Xenix. But… it also runs them at 8086 speeds. It took about an hour to install WordPerfect from a disk image on my computer via the DOS setup program, which I expect is how long a computer from that period would take to read 11 floppies. There didn’t seem to be any option in the emulator to speed that process up, either. Felt like loading a game on the Commodore 64 using the notoriously-slow tape drive.

But I got it to run to my liking… and I was just about to start typing up a storm like back in the good old days of the 1990s… when I realized that I had forgotten all of the WordPerfect keyboard shortcuts. I had to use the mouse menu or look up the codes in the help pages constantly just to get it to do basic things like boldface and centering text. And when neither of those availed me, I had to just look up advice in a web browser. I realized that this was getting me nowhere.

Also, there was the little matter of getting the text out of the emulated system and onto something I could copy and paste into a Word document or a WordPress input dialog. Turns out that’s not as easy as it sounds either. I anticipated this issue back in college when I converted all my old WordPerfect 5.1 files to the (then-new) WordPerfect 8 .wpd format. Word and LibreOffice are okay with those, but documents written with the 25-year-old DOS program become a garbled mess. I understand you can open them right with the latest version of WordPerfect (which has miraculously survived the Microsoft Office onslaught and made it to version 17) but that’s $54.95 I really don’t care to spend right now (although it would make a great gift for the wandering nerd in your life.)

So… I spent all this time rearranging the chairs in the Procrastination Station when I could have been on the writing train. Using anything. MS-DOS Edit. Word with a reverse-colors Windows theme. Vim or emacs in a Linux console. Heck, even a pencil and paper. That’s just me, though. I’m so blinded by nostalgia and a need to return to a time where I felt more creative and less writers-blocked that I spend all my time making ancient software work instead of doing the work of my soul or continuing that fantasy novel I’m currently stuck on chapter five of.

Hell, even writing this blog post is a form of procrastination… as well as a way to keep myself sane on a lonely Saturday in which absolutely nothing else is going on. But at least I’m writing again. At least I’m writing something.