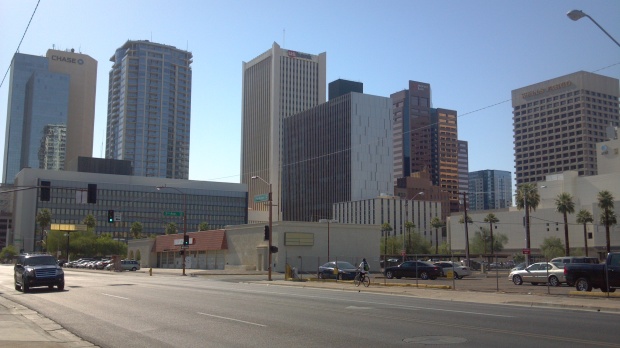 (Here’s a picture of the Phoenix skyline. I didn’t actually get any pictures at Comicon. To know why, read below.)

Last weekend, my wife and I packed up the Ford Escape and went down to Phoenix for Comicon. We had hoped to get in touch with our fellow nerds, get some awesome nerdy merchandise to decorate our new apartment, and find out neat stuff about the shows and books we liked. I wanted to see Star Trek stuff and meet Uncle Scrooge artist Don Rosa, and L (my wife) wanted to get Dresden Files author Jim Butcher’s autograph and go to Firefly panels.

What we got was not what we expected, but probably, in retrospect, we should have. Phoenix was burning hot—of course it would be, it was June. I did okay. I grew up in the broiling hot deserts of Victorville and Barstow, and my body was able to acclimate to the hundred degree temps, albeit grudgingly. My wife, who is from Michigan originally, was not able to acclimate. She was fine as long as she was in an air-conditioned building—however, Comicon was spread out among the three buildings of the Convention Center as well as four other hotels in the area. To get from a panel in the North Building to one in the Radisson, two blocks away, took about 15 minutes because of all of the crowds and roadblocks we had to go around in order to get there. By Saturday evening, poor L was red as a beet and about to faint. The only shuttles or public transportation they had available were sweaty people on pedicab tricycles and the Phoenix Light Rail, which never seemed to get us close enough to the Convention Center or to our hotel room to be of much use at all. So on Sunday we drove to the convention—but the closest available parking garage was still half a mile away from where we wanted to be and they charged us $12 for the “convenience” of using it.

And the crowds—oh god, the crowds! I probably should have seen that coming too. Every corridor in the Convention Center was wall-to-wall people, including people with angel wings or spiky shoulder pads on their costume that would poke you as they passed, inconsiderate youngsters that would just stop right in front of you to take a picture of somebody in a costume and block the way for everyone else, people with onboard PA systems in their suits that would play awful music, and lots of people in militaristic costumes with full armor and very realistic-looking guns. Not just your standard fantasy knights or Halo Spartans or Stormtroopers, but people dressed like US Special Forces, complete with ghillie suits and sniper rifles, and “zombie hunters” that were better armed and armored than your average SWAT team. Add to the mix about five thousand security personnel and actual policemen barking orders in all directions, and the combined effect was enough to trigger both mine and my wife’s claustrophobia and agoraphobia on several occasions.

I didn’t go to nearly as many panels as I wanted to go because I couldn’t deal with pushing my way through the crowds and feeling trapped in that roiling sea of humanity. Meanwhile, L missed one of her panels because she accidentally wandered into a prohibited area of the Convention Center and a security guard repeatedly called her “Sir” as he shouted at her to leave. My wife is chubby, to be sure, but seriously? Being repeatedly mistaken for a man was enough to make her extremely upset. She was already upset about feeling invisible among the tens of thousands of people who just wouldn’t get out of the way for us.

Not that any of the actual panels we went to were very good, mind you. The con’s major Firefly panels were a Browncoats cosplay forum and one entitled “Why Firefly is Dead and You Should Really Just Move On.” Seriously? That’s like telling a Tolkien fan that they shouldn’t read Lord of the Rings anymore because Tolkien’s been dead for forty years, and all the cool kids are into George R. R. Martin now, and they should just shut up. All the Star Trek panels I went to seemed to be too interested in the JJ Abrams movies, which I guess is what’s popular these days, but I wanted to talk about Picard and Data. I went to an entertainment panel on “Which Captain is the Best,” however, and while pedantic and silly, like all “Kirk vs. Picard vs. Sisko vs. Janeway vs. Archer” battles have been since the 1980s, it was at least fun. And it seemed like every panel was set up to sell you something. Even the “Astronomy of Middle Earth” panel we went to was essentially a commercial for the presenter’s Mobile Inflatable Planetarium business, which she uses to present astronomy lectures to elementary schools, birthday parties, business luncheons, and weddings, apparently.

And there was a comedy panel I went to where the comedian was extremely insulting and unfunny. At one point, she called Star Trek fans “fags” because they “invented slash fiction.” Really? She couldn’t do any better? Star Trek fans present so much humor, you could do an entire hour of comedy on them alone. And they’re so self-deprecating—they even thought it was funny when William Shatner told them to “get a life” on Saturday Night Live. But to call us fags? I just got up and walked out of the room. I wanted intelligent discussion about science fiction and fantasy and sequential art and to meet other pedantic, overly intellectual geeks like myself—instead I got panic attacks, never-ending commercials, and insults about one’s sexuality thrown at both my wife and myself.

I guess I should have expected this, but I at least thought that the convention organizers would at least throw a bone to old nerds like me. But no, this thing was geared completely towards the 12-20 year old crowd who just consume all the new comics and shows and buy what popular culture tells them to buy. It didn’t answer the big gaping hole in my heart, my deep need to connect and share and belong with people like myself, intellectual nerds who I can talk to with my entire vocabulary, not just the limited subset of words I hold myself back to in order to not be made fun of by the illiterate rednecks I live and do business with on a regular basis. I want to discuss things like science without having to rad it up 30% for people who normally don’t give a shit about discovery or space or curing cancer, like at the one panel I went to, “Adventures in Science,” where ASU grad students talked about all the times they “almost died” when they went to Africa to install radio telescopes. I wanted to know more about what they were actually studying with those telescopes, but my question was drowned out in a sea of questions about “Was it scary when you found that scorpion in your boot?” This is Phoenix we’re talking about here, in the heart of the Sonoran Desert. Scorpions in your boots are a regular occurrence around these parts, or at least they were when I grew up.

So I don’t think either my wife or I will go to that one again. We’re still looking for our nerd home.