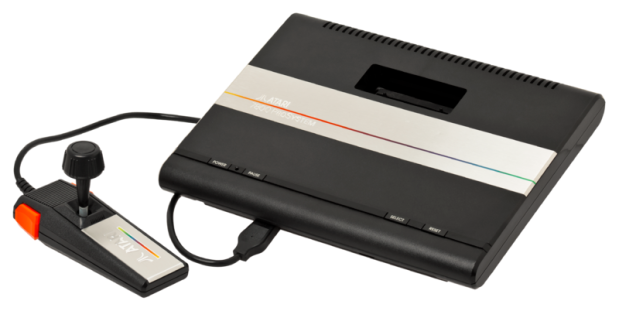 Back in the late 80’s, I desperately wanted an Atari 7800. I loved the Atari 2600 to death and thought that a 7800 would be three times as awesome. I remember poring over the all the video game catalogs and ads I could get my little hands on, reading over and over about how the 7800 could play all existing 2600 titles as well as how it had a bunch of “pro” titles that closely duplicated the arcade experience! Yeah, there was a couple of things in there about a Nintendo, and a Sega, but I didn’t care about those. Mario and Zelda looked like boring Japanese cartoon characters. I wanted to race around the world in Pole Position II, save the galaxy in Galaga, and play an arcade-perfect version of Ms. Pac-Man.

And also, because the Atari 7800 was considerably cheaper than both the NES and the Master System, it would be easier to convince my parents or aunt and uncle to buy it for me for Christmas. So I begged and pleaded and sent subtle hints to the grownups in my life, and when Christmas morning finally arrived, what to my wondering eyes should appear but… not a 7800. Instead, I got a box of about 20 loose Atari 2600 cartridges my dad found at a yard sale. It wasn’t bad; there were even a few awesome games in there, like Frogger II and Berzerk. It just wasn’t what I wanted. It kept me going until the following Christmas, however, when I got… a Nintendo. It was a hand-me-down from my cousin who had just moved on to the Sega Genesis. But as soon as I saw and played Super Mario Bros., Legend of Zelda, Castlevania, and Metroid for the first time, everything Atari had made up to that point suddenly seemed rather childish. You could play games on Atari… but Nintendo transported you to brand-new worlds.  I had moved on.

I never got to experience the Atari 7800 “in the flesh,” so to speak. I ran across Atari 7800 cartridges mixed in with 2600 games at flea markets and yard sales, but never came across an actual system. The 7800 just seemed to disappear, along with Atari’s other major flops, the Lynx and the Jaguar, relegated to the dustbin of history. I never played a 7800 game until this weekend, when I discovered that the Internet Archive had a full collection of 7800 games available for download completely legally (seriously, check it out here.) So I downloaded it (it was only 4.6 MB in size!), found a decent emulator (ProSystem) for Windows, and decided to see what I had missed out on when I was a kid.

The truth is… I wasn’t missing out on much. While the Atari 7800 had superior graphics to the 2600, its graphics did not look very good at all when put up against the NES. The 7800’s MARIA graphics chip had a native 320 x 240 graphics mode (much sharper than the NES’s 256 x 240), but since it was so hard to program for it, developers mostly used the chip’s 160 x 256 pixel graphics mode, which had rectangular, not square, pixels. This made the games look like blocky last-generation titles from the Atari 5200 or earlier 8-bit computers.

Thanks to the MARIA chip, which could handle over 100 sprites on screen without flicker or slowdown, the Atari 7800 excelled at single-screen arcade games like Asteroids, which came to life on the ProSystem with colorful sprites and fluid animation not before seen on a home console. 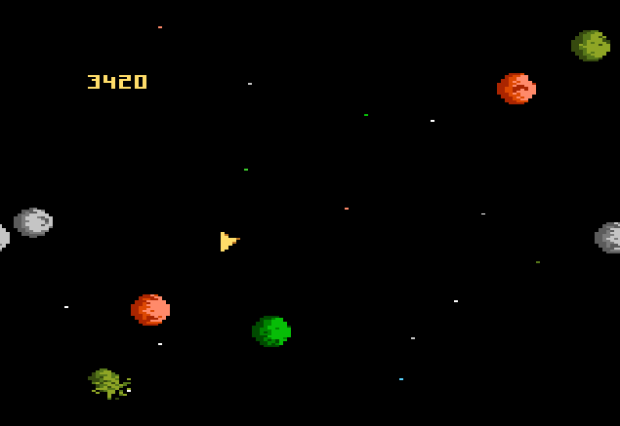 (Seriously, static screenshots don’t do the game any justice. Check out this YouTube video for a review of 7800 Asteroids from one of my favorite online game reviewers, Classic Game Room.)

However, it was not very good at the side-scrolling platform games, like Super Mario Bros., that were the NES’s bread and butter. Few games of that genre appeared on the 7800, and those that did, such as Scrapyard Dog and Kung-Fu Master, were choppy, slow, and clunky compared to their NES and Sega counterparts. 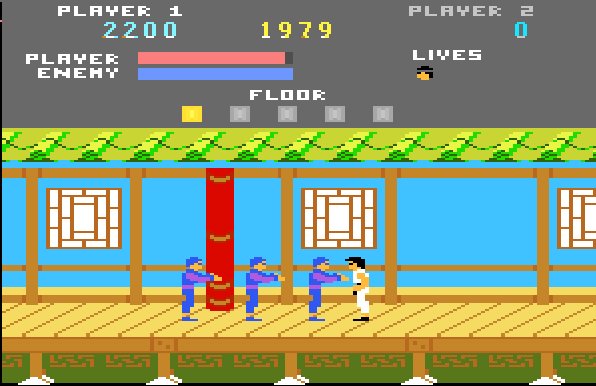 (But at least the 7800 version of Kung-Fu Master has zombies… that’s something, right?)

Another thing that set the 7800 back compared to its competition was that it used the same sound chip, the TIA, as the Atari 2600. While you could create a neat variety of sound effects with it, creating memorable background music like the classic Mario theme, the Zelda theme, and the Ducktales “Moon” Theme was not the TIA’s forte. Most 7800 games didn’t have any background music at all, and only a few bleeps and bloops for sound effects. And many 7800 games with 2600 counterparts used the same sound effects for both versions! I did discover some awesome music playing Ballblazer and Commando, however… but it turns out those cartridges had a special sound chip, POKEY, in them to deliver quality sound effects. Why couldn’t Atari have built POKEY into the unit? They probably thought that games didn’t need music. It was far from a common feature in games in 1984 when the system was first designed.

So what was the Atari 7800 good for? As I said before, it had a lot of great early-80’s arcade game conversions. Asteroids, Ms. Pac-Man, Galaga, Joust, Dig Dug, Centipede, Xevious… they all look great and play great on the 7800. If you are into those types of games, the Atari 7800 is a great system to collect for. But you could also play most of those games on the NES… or for that matter, the Atari 2600, or the Atari home computers, Commodore 64, IBM PC, Apple IIe, or whatever other system prospective buyers of the 1980’s had lying around. And these days, you can just download the original arcade ROMs or purchase any number of arcade game compilations. So it not only was not giving anyone anything new, it was also giving the game-buying public stuff they pretty much already had.

What else did the Atari 7800 bring to the table? Well, it had several ports of late-80’s arcade games: Kung-Fu Master, Double Dragon, Commando, and Ikari Warriors, to name a few. However, as I mentioned before, any game that required complex horizontal scrolling was crippled from the start on the 7800, and all those games had much better NES counterparts. There were a few good flight simulators that beat anything the NES had at the time, such as Ace of Aces, F-14 Tomcat, and F-18 Hornet, but your flight simulator enthusiast would probably be playing those on his or her home computer, which would have more processing power and a greater selection of joysticks.  There were a few mediocre sports games, but Hat Trick was no Blades of Steel, and Pete Rose would quickly prove to be an embarrassing choice for a sports game spokesperson (but then again, so would Mike Tyson.)

There are a few hidden gems in the Atari 7800 library that you can’t get anywhere else, however. Ninja Golf has a random yet completely unforgettable premise: you’re a ninja, playing golf, and to get from the teeing ground from the putting green, you must jog through a dangerous course of enemy ninjas, frogs, snakes, dragons, and other inexplicable golf course hazards. Bizarre concept aside, the game plays like a poor clone of Kung-Fu Master, and the novelty wears out quickly. There’s also Midnight Mutants, a Zelda-like adventure game with a horror theme, where you wander through a New England village in autumn fighting zombies and bats in order to rescue Al “Grandpa Munster” Lewis from the clutches of an undead warlock, who you see being burned at the stake in the game’s opening sequence:

(You’d never see anything like this in any Nintendo game… not until Mortal Kombat II for the SNES, anyway.)

Sadly, they weren’t enough to save the Atari 7800 from being relegated to the dustbin of video game obscurity. Looking over the ROMs I downloaded, I saw that there were less than 100 games total released in the US, and a lot of genres are completely missing from the 7800 library. There are no RPGs, no strategy games, no puzzle games except for an unreleased prototype of Klax. There are no ports of contemporary Atari arcade games, like Paperboy, 720, or Gauntlet, that would have been hits on the system. And there are only a handful of third-party games from a handful of third-party developers. It’s like they didn’t even try to compete with the NES, or maybe they thought its backwards compatibility with the Atari 2600 would fill in the gaps.

But by sticking to the past, Atari was sacrificing their own future. The backwards compatibility of the Atari 7800 meant that the new advanced 7800 games were competing, not just with Nintendo and Sega games, but with the 700+ games in the Atari 2600 library, many of which were being liquidated for pennies due to the video game crash of 1983. And Atari was selling, simultaneously with the 7800, a remodeled, cheaper version of the Atari 2600 which was “under fifty bucks!”, their remaining stock of Atari 5200 cartridges and games, and a brand new system, the Atari XEGS, which was an Atari home computer reconfigured into a game console that played most existing Atari 8-bit cartridges as well as new enhanced games made just for it.  With all of these systems to support, it’s no wonder Atari was failing to put their best foot forward in the cutthroat market of the late 1980’s. The technology and the design were moving forward… and Atari just seemed more and more like the old man sitting in the corner dreaming of the good old days when he was in charge. He occasionally tries to be “hip” to get the kids to notice him, but really he’s only just embarrassing himself.

That’s what I see when I peer into the Atari 7800 catalog… Atari’s midlife crisis writ large on the pages of history. Trying to capture the spotlight again, trying to regain lost ground and re-win old victories, trying to win the future with the same old playbook. There was so much potential left… but by the time Atari discovered it, the world had moved on.

And we all know what had happened after that… after a mediocre showing of their Lynx handheld in 1990 and the complete flop that was the Jaguar in 1993, Atari was sold off to JTS, who sold it to Hasbro, who finally sold it to Infogrames before they themselves went bankrupt. Now, the gutted corpse of Atari’s intellectual properties is up for sale to the highest bidder. The rest… is silence.

But hey, at least Grandpa Munster can still be saved!